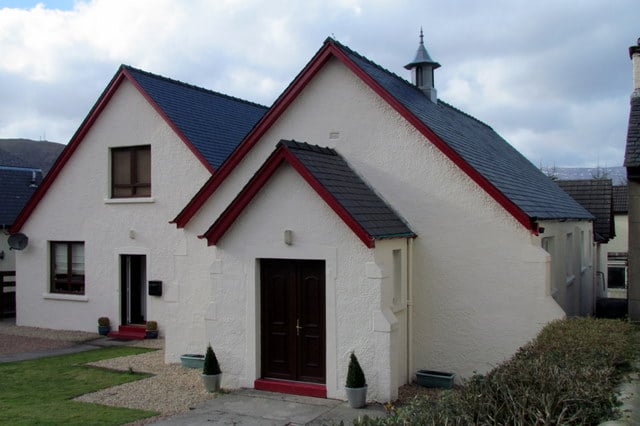 Originally belonging to the 19th century Free Church, the Congregation joined the United Free Church in 1900 and continued independently of the Church of Scotland in 1929. Our present church and manse buildings were opened on 29th November 1933.

Our  church hall has since been rebuilt, and was opened in December 2000.

Since 1929, 10 ministers have served, including the Rev. Bruce Rossetter who retired in April 2007 after 17 years of valued ministry.

At the beginning of 2010, a process was finalised which saw the church transferred from the United Free church of Scotland to the Baptist Union of Scotland, https://scottishbaptist.com.

Our first Baptist Pastor was David White and under his care, the Lord blessed the fellowship. There were regularly over 100 (including visitors) in attendance at the morning service, which was virtually the capacity of the old building, so it was decided to extend the church to accommodate 150.
This project was completed in September 2013 and as well as providing extra space has also made a big improvement to the church.

We had a period of 2 years in vacancy, during which time the Lord provided His people to keep the church going, both raising up people within the fellowship and benefitting from kind and willing visiting preachers.

In February 2020 we were delighted to induct a new minister the Rev. Jonathan Tink who, along with his wife and family, was previously one of our missionaries; an independent missionary on the Isle of Skye.

We are seeking ways to engage the congregation in the ministry and not just observing from the side-lines, and want to be a contemporary example of what it means to follow and worship the risen Lord Jesus in our own day and culture.